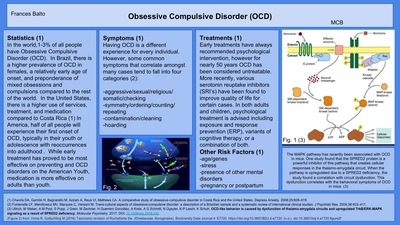 In the world,1-3% of all people have Obsessive Compulsive Disorder (OCD). In Brazil, there is a higher prevalence of OCD in females, a relatively early age of onset, and preponderance of mixed obsessions and compulsions compared to the rest of the world. In the United States, there is a higher use of services, treatment, and medication compared to Costa Rica (1) In America, half of all people will experience their first onset of OCD, typically in their youth or adolescence with reoccurrences into adulthood . While early treatment has proved to be most effective on preventing and OCD disorders on the American Youth, medication is more effective on adults than youth.

This work is licensed under a Creative Commons Attribution-Noncommercial-No Derivative Works 3.0 License.