The external globus pallidus (GPe) in the basal ganglia is associated with a variety of functions including the control of voluntary movements. To fully understand the input control of the GPe, the projections from the striatal dSPN neurons to the Npas1 neurons within the GPe in Parkinson's Disease (PD) model and control mice were studied as well as reciprocal connections between Npas1 neurons and PV neurons within the GPe. Using cell-specific transgenic mice, current amplitudes of dSPN-Npas1 projection were recorded with whole-cell patch-clamp recordings and optogenetics. It was found that the dSPN-Npas1 projection in the mouse model of PD had significantly greater synaptic current than in control mice. The amount of dSPN axons in the GPe, i.e. fiber density, was also increased. To unveil the underlying mechanism, the number of dSPN-GPe synaptic contacts between a mouse model of PD and control mice was explored. Synaptic contact was identified through two ways: 1) the immediate spatial relationship between GFP+ terminals from dSPNs and postsynaptic marker gephyrin; 2) the overlap between GFP+ terminals from dSPNs and presynaptic marker Vesicular GABA transporter (VGAT). Subsequently, intrapallidal circuitries were also investigated through measurement of effects of Npas1 input on the firing rates of the PV neurons and current amplitudes of Npas1-PV projection. A correlation between current amplitude and inhibition of PV+ firing rate was found. Previous results from a similar experiment in which Npas1 projected to Npas1- neurons instead of focusing on specific cell class PV was compared with results from this study to search for a common trend as PV neurons are the most populous within the GPe. Overall, from the study of dSPN-Npas1 and Npas1-PV projections, a better understanding of the circuitry within the basal ganglia is reached and can be used to more specifically target root causes of symptoms in Parkinson’s Disease. 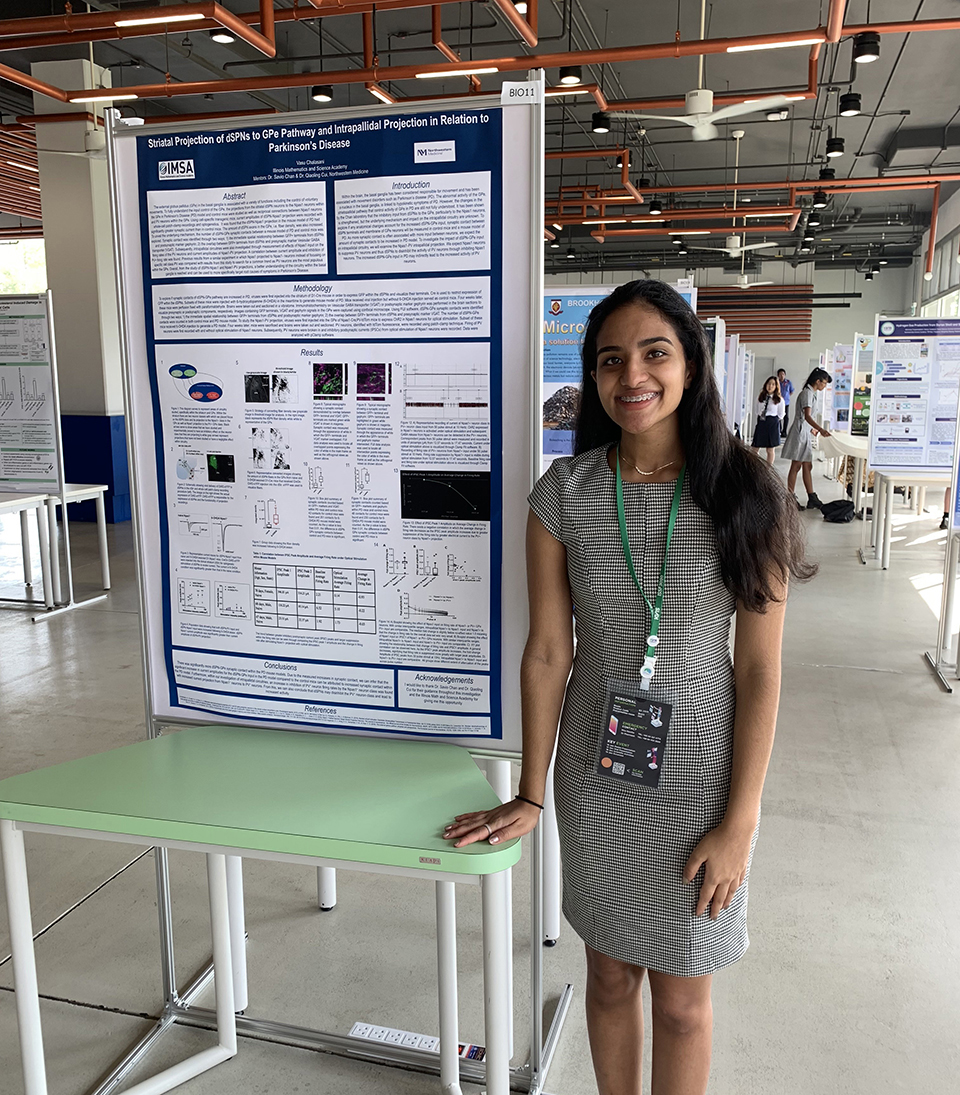 Chalasani, V. (2020). Striatal Projection of dSPNs to GPe Pathway and Intrapallidal Projection in Relation to Parkinson’s Disease.
Retrieved from: https://digitalcommons.imsa.edu/student_pr/51