"The Art of Self Defense in Nature" 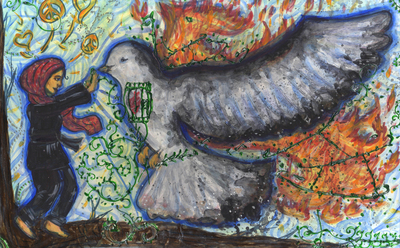 This piece is a representation of how people connect to nature, but it takes place in a fantasy world, starting with the idea that the person shown in it is most certainly not human-sized, and that there is a live phoenix and a dove, all with various elements making them unrealistic. This piece draws some inspiration from Asian cultures, and the traditional yin and yang symbol, as well as the karate uniform and the idea of "chi" being so powerful that it can potentially cause physical change in the world are meant to highlight that. The uniqueness of this piece stems from the dove having a shadow in the form of a phoenix. In this piece, the dove represents peace and harmony, and after I had painted it, I was reminded of IMSA's 2018 Clash of the Halls and 1502's theme, and that is how the phoenix came to be. The dove's heart is caged, and the dove imprisons it in its shadow. The phoenix may, at first glance, seem like the dove's evil counterpart, but phoenixes, in their symbolism, symbolize rebirth; the start of new life from the ashes of a fire, showing that the "bad" has good in it, and the dove- the "good" because doves typically symbolize peace- has bad in it for imprisoning the phoenix- drawn from the idea of yin and yang. The girl that I have drawn is essentially trying to free the good in both spirits- the dove and the phoenix- by using her inner spirit, her "chi," and that is why she wars a martial arts uniform, to represent her powers and prowess even though she is smaller than the birds themselves. Overall this piece is meant to inspire your imagination to run free, and I hope you enjoyed a little break from reality.

This work is licensed under a Creative Commons Attribution-Noncommercial-No Derivative Works 4.0 License.

Copy permitted for study or investigation purposes, citing the source Illinois Mathematics and Science Academy. Any other use requires permission. For more information please contact irc@imsa.edu.