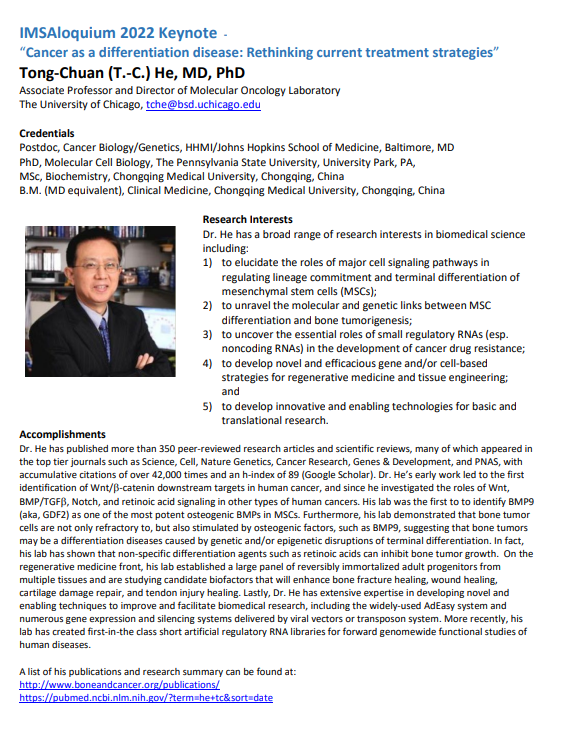 Dr. He has published more than 350 peer-reviewed research articles and scientific reviews, many of which appeared in the top tier journals such as Science, Cell, Nature Genetics, Cancer Research, Genes & Development, and PNAS, with accumulative citations of over 42,000 times and an h-index of 89 (Google Scholar). Dr. He’s early work led to the first identification of Wnt/β-catenin downstream targets in human cancer, and since he investigated the roles of Wnt, BMP/TGFβ, Notch, and retinoic acid signaling in other types of human cancers. His lab was the first to to identify BMP9 (aka, GDF2) as one of the most potent osteogenic BMPs in MSCs. Furthermore, his lab demonstrated that bone tumor cells are not only refractory to, but also stimulated by osteogenic factors, such as BMP9, suggesting that bone tumors may be a differentiation diseases caused by genetic and/or epigenetic disruptions of terminal differentiation. In fact, his lab has shown that non-specific differentiation agents such as retinoic acids can inhibit bone tumor growth. On the regenerative medicine front, his lab established a large panel of reversibly immortalized adult progenitors from multiple tissues and are studying candidate biofactors that will enhance bone fracture healing, wound healing, cartilage damage repair, and tendon injury healing. Lastly, Dr. He has extensive expertise in developing novel and enabling techniques to improve and facilitate biomedical research, including the widely-used AdEasy system and numerous gene expression and silencing systems delivered by viral vectors or transposon system. More recently, his lab has created first-in-the class short artificial regulatory RNA libraries for forward genomewide functional studies of human diseases.