JAG1 Role in the Extravasation of Metastasized TNBC Tumor Cells

Breast cancer is the second leading cause of cancer death in women. Triple negative breast cancer (TNBC) is an aggressive subclass defined by its lack of hormonal receptors and HER2 amplification. Although TNBC only accounts for 15% of all invasive breast cancers, there are limited therapeutic options for patients with TNBC. Although breast cancer patients have a favorable prognosis if their tumor is detected early, patients with TNBC are prone to earlier recurrence and local/distant metastasis. Consequently, patients with metastatic TNBC have <15% relative 5-year survival rate. The development of metastasis in TNBC is a complex and poorly understood process that includes multiple steps such as genetic and epigenetic alterations, angiogenesis, epithelial-to-mesenchymal transition (EMT), intravasation, and extravasation. Expression of JAGGED-1 (JAG1), a Notch ligand, correlates with metastatic status and poor survival in clinical data. However, the exact mechanism in which JAG1 increases metastasis is unknown. We hypothesize that JAG1 increases metastasis by interacting with endothelial cells. In order to test this idea, we generated JAG1-knockout cells using CRISPR/Cas9 technologies and then modeled the extravasation of these cells compared to JAG1-positive cells. Specifically, we interrogated lung capillary extravasation after intravenous injection of TNBC cells. The lung was chosen due to the propensity of TNBC cells to invade the lung. Preliminary data demonstrates that JAG1 presented in tumor cells acts as a signaler to permit and promote extravasation and metastasis of the cancer cells. For further studies, the long term effects of tumor derived JAG1 will be studied to understand the consequences of JAG1 mediated extravasation on metastatic burden and survival. 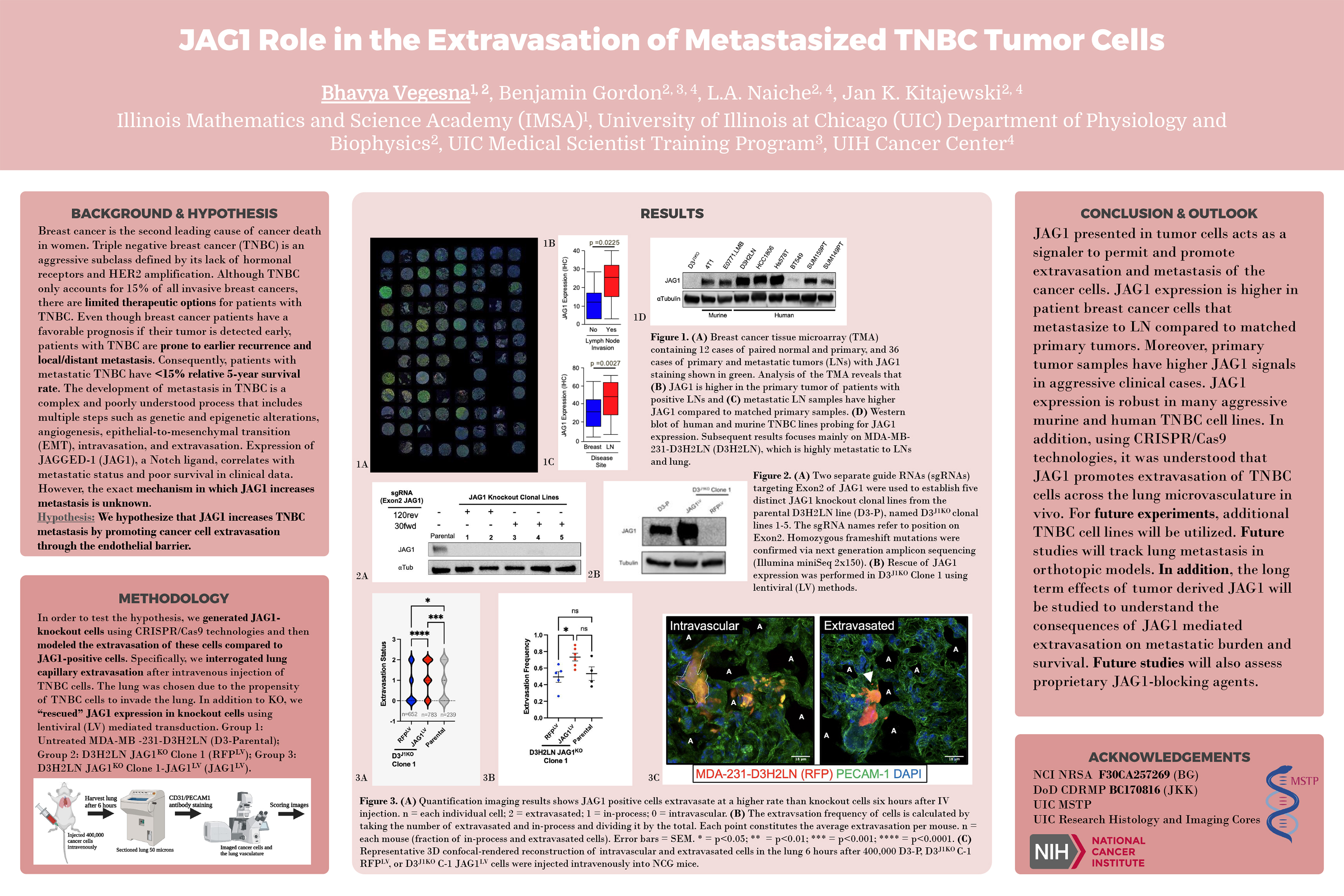 Click on the image above to open a full resolution pdf

Vegesna, B. (2022). JAG1 Role in the Extravasation of Metastasized TNBC Tumor Cells.
Retrieved from: https://digitalcommons.imsa.edu/student_pr/104