With no current vaccine for Human Immunodeficiency Virus ( it is crucial to study what factors influence how HIV infects host cells to develop new strategies and therapies to combat this pandemic Cleavage and polyadenylation specificity factor 6 (CPSF 6 is an HIV host factor known to influence HIV infectivity and trafficking early in the infection CPSF 6 has been implicated in supporting the innate immune response but its impact in the context of HIV is unclear We hypothesize that the overexpression of CPSF 6 will increase the antiviral response and decrease HIV infection in T cells To test the hypothesis, we require a way to overexpress CPSF 6 in mammalian cells to observe the antiviral response of HIV infection We are going to implement gene cloning, a process used to replicate DNA for use in later experimentation, to express CPSF 6 To make a CPSF 6 containing vector, we prepared an empty expression mammalian vector through E coli transformation and plasmid purification, restriction enzyme digest, and then gel electrophoresis to confirm successful plasmid linearization Post purification, the CPSF 6 gene was then assembled into the empty vector using Gibson Assembly reactions Successful isolation of the CPSF 6 gene containing plasmid was confirmed by Sanger sequencing Further research will consist of expressing the vector in mammalian cells These cells will be tested for their antiviral gene expression by Western blot and infectivity for HIV by flow cytometry Ultimately, this experiment will lead to a greater understanding of CPSF 6 ’s role in the innate immune response in HIV infection. 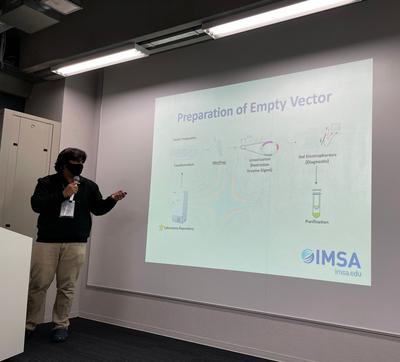 Taukolo, K. (2022). The impact of CPSF6 on the innate immune response to HIV infection.
Retrieved from: https://digitalcommons.imsa.edu/student_pr/109